Join us in Welcoming Alan Rowe to the SyntheSys Defence Team 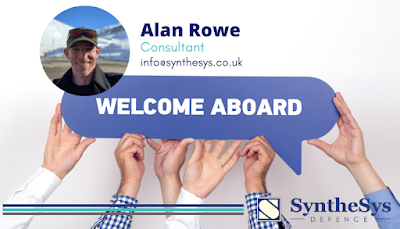 After what has been an exciting first half to 2022 for SyntheSys Defence, we are pleased to welcome Alan Rowe to the Team.
Alan served in the Royal Navy for 23 years, initially starting off as an Operator Mechanic working on ships weapons systems, combat systems, as well as operating radar and later becoming Leading Seaman and continuing on to become a Petty Officer.
Alan has a strong background in Tactical Data Links (TDLs) and it is this experience which makes him well placed to work with SyntheSys Defence, initially delivering our world-class TDL training.  Alan was a TDL operator and Network Manager, and taught TDL systems to the future generation of our Royal Navy.
Please join us in welcoming Alan to the team.

Posted by Sarah Thomas at 09:19 No comments: