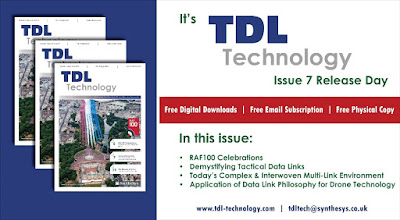 We are delighted to release Issue 7 of TDL Technology, the magazine that offers technical insight, best practices and free resources about all aspects of Tactical Data Link (TDL) implementation, integration, and management.

Our aim is to build a magazine with an ethos of collaboration and knowledge sharing and we focus on making TDL Technology less about SyntheSys, and more about the TDL Community as a whole.


The free resource we are offering with Issue 7 is a TDL Glossary of Terms E-Book that may be useful for those who are less familiar with shortened terms, or for those who just need an occasional reminder.

To read the Digital Edition of the magazine, visit: www.tdl-technology.com where you can also subscribe to receive future issues of TDL Technology magazine directly into your mailbox. If you would like to receive a free hard copy, email tdltech@synthesys.co.uk

May we take the opportunity to wish our readers and subscribers all the very best wishes for the festive season.
Posted by Sarah Thomas at 11:35 No comments:

Another successful Data Link Manager / Interface Control Officer (DLM/ICO) Course to round up a productive 2018! 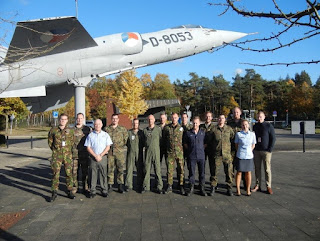 The DLM/ICO course is designed to catapult individuals with little or no knowledge of TDL and associated responsibilities to a stage where they can successfully and efficiently carry out their duties. The course provides students with a fundamental understanding of various TDLs, then, using state of the art simulation tools, practically apply this knowledge to real world scenarios.  The DLM/ICO course is based on North Atlantic Treaty Organisation (NATO) & United States (US) documentation fused with instructor experience.  The course incorporates practical exercises and assignments which gives a working understanding of course concepts.

To learn more about how the DLM/ICO course can enhance your understanding and overall performance, contact training@synthesys.co.uk

We are already planning our courses for 2019, please get in touch if you may be interested in attending.  Our current 2019 scheduled training dates can be viewed here.

Posted by Sarah Thomas at 12:21 No comments: 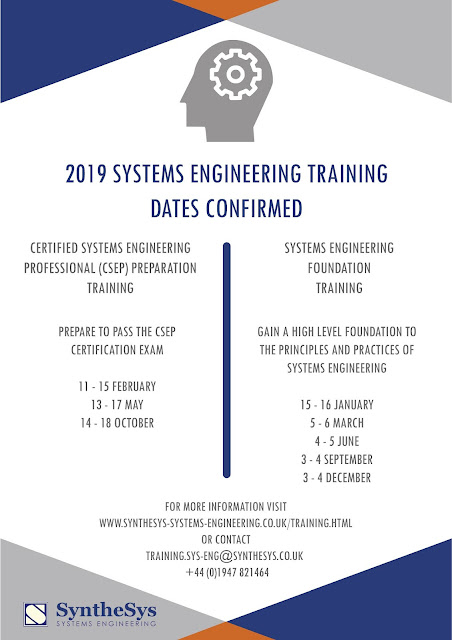 For those working towards the Certified Systems Engineering Professional (CSEP) accreditation, we have a course specifically designed to prepare you to pass the examination by combining real-world scenarios with theory, presented in the INCOSE Systems Engineering Handbook, which will enable you to sit comfortably the INCOSE CSEP Certification.

For more information, or to read more about how Systems Engineering training can often result in overall increased competitiveness, visit:


www.synthesys-systems-engineering.co.uk/training.html
Posted by Sarah Thomas at 09:56 No comments:

SyntheSys has been accepted onto the Crown Commercial Services DOS3 register. Organisations that secure a position on the framework can apply to offer their eligible services in the digital space to government teams via the framework.  SyntheSys services can be found under the ‘Digital Outcomes’ and ‘Digital Specialists’ categories.

The main advantage for companies using the service is that they can be assured that the members listed via the Crown website have been pre-qualified to establish their suitability and reliability.

For more information about the Crown Commercial Services visit: https://www.crowncommercial.gov.uk/s/

If you would like to discuss our specific offerings, please contact info@synthesys.co.uk
Posted by Sarah Thomas at 16:52 No comments:

SyntheSys’ Flying the ‘STEM’ Flag by Sponsoring the ‘S Prize’ 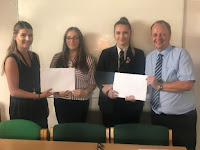 It’s no secret that Science, Technology, Engineering and Mathematics (STEM) subjects provide the foundations of future innovation.  Engaging young people to become inspired by these subjects and developing the talents that are needed, are a key to ensuring a thriving knowledge-based economy as part of our country’s place in future, global markets.

SyntheSys has been playing its part in contributing to STEM initiatives with the Whitby-based firms’ Managing Director, John Hartas, recently getting involved in a dynamic initiative at a local school.

John, who is a STEM Ambassador (www.stem.org.uk), was thrilled to initiate Caedmon College’s ‘S Prize’.  Youngsters from the college battled for the prize, amazing everyone with their extensive knowledge of subjects ranging from how plastic in the ocean affects marine life, to mysterious Dark Matter.

John said: “The submissions we received were as documents, PowerPoint presentations, a model of a volcano (that actually erupted), and a computer game.  All the submissions were of a really high standard and the judges were greatly impressed.”


The winner of the Key Stage 3 prize was a joint team formed by Joshua Harland and Connor Betts. Their submission was on the Life Cycle of a Star and included a computer game they invented.

The Key Stage 4 prize went to Rebecca Morgan for her submission in the style of a scientific paper on Dark Matter.  Rebecca said her project overall was based on the questions and confusion about Dark Matter which, in her opinion, is one of the biggest mysteries in any modern day scientific field.  She said: “I was inspired to write about this topic as no one truly knows what Dark Matter is yet, so I decided that since it is going to be one of the most talked about topics in science for many decades to come, I would want to be informed of potentially one of the biggest scientific breakthroughs of the century.”

The prize for Key Stage 5 was won by Emma Sharpe for her submission on the effects of plastic pollution on our oceans.  Emma said that taking part in this project had inspired her to be more conscientious about recycling, and in future, she hopes to take part in activities such as beach cleans in order to help keep our oceans free of plastic.

It is now hoped that the awards will become an annual event.
Posted by Sarah Thomas at 11:45 No comments: